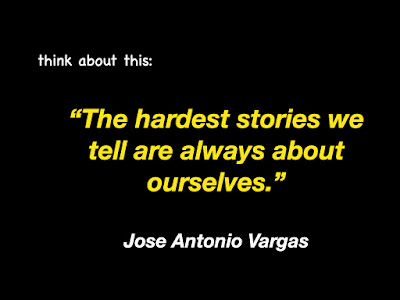 Most people are shy when it comes to talking about themselves. Which is unfortunate since it’s a subject they know they best. Asking an applicant to tell a story about a time when they did something gives interviewers an opportunity to learn something about their behavior and see them as they are: the subject is familiar and easy and allows their personality to come through. But asking an employee to tell a story about something special they might have done at work is much harder for them to do – mostly they don’t want to seem like they’re tooting their own horn. But that’s just the kind of story that companies want, and which others can learn from or be inspired by – the trick is creating a workplace where storytelling is as natural as talking to friends in a casual setting and telling them that same story. About things that often happen when nobody else is around – supervisors especially; it happens at that moment of service between an employee and a customer when it’s just the two of them. Give employees a safe environment where they can talk about it. Supervisors can then get involved and thank or coach them. Other employees can learn from stories like that. Organizations can and should build a culture around storytelling. Make it easy for your employees to talk about themselves today.