Out of the mouths of babes (oft times come gems)... 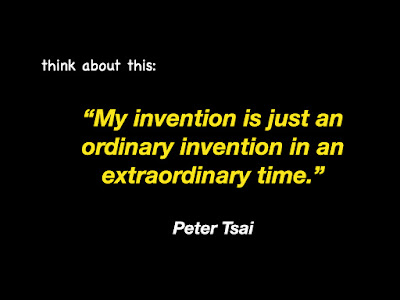 Some ordinary inventions become great: like 3Ms Post-it Note or Tsai’s N95 respirator. The first became so widely used and recognized that it endured long beyond its original patent, and the second was invented by the author of today’s quote in 1995 as an OSHA-approved safety product that didn’t gain widespread use and notoriety until this year’s pandemic. As they say: “who’d a thought”? Or like The Mirage: it was a pretty good idea that was panned by everyone before it opened and set Las Vegas on a huge and seemingly endless expansion boom afterward. Or like the applicant tracking and paperless HR computer systems I pioneered: initially they were just in response to basic administrative needs but then the publicity both received here in Las Vegas inspired others to push them into the mainstream. Or this: UNLV’s International Gaming Institute runs a college course in their gaming lab where students are encouraged to develop and patent game ideas and pitch them to investors – ordinary students producing some very extraordinary games (and revenues). Ordinary people come up with ideas every day that have the potential to be great. The bottom line is that every idea has the potential to be great – just because you don’t think yours is doesn’t mean you shouldn’t pursue it. Don’t be so quick to dismiss any ideas today.