Make sure what you're communicating is important... 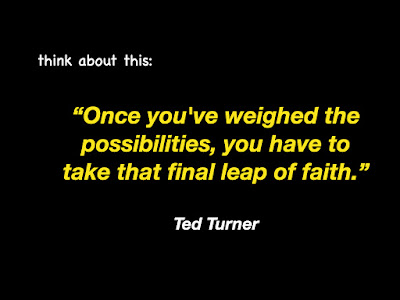 Maybe we should ask how well Turner’s leap of faith worked out. Do you remember TV before cable? 3 networks with different programming, and all of it entertaining. Then there was Cable TV: way more than anyone needed… and most of anything good you had to pay extra for. And how about the news before CNN? People waited until 6pm to get the nightly 30-minute news shows and, if you were up for it, the local news at 11pm: news waited to be reported. Then came CNN: breaking news 24 hours a day, and when there was nothing breaking, they kept repeating stories over and over. With too many stories that were meaningless until someone told us it was important. But still meaningless to most people. TV networks back then had programming that was entertaining and a separate division that produced the news: then someone thought ratings might go up if they made it all entertaining. That blurred everything and now nothing and everything is important… a sad unintended result. That’s no way to communicate. The real problem is that companies and their leaders compete against endless and pervasive news cycle, the internet, and smartphones that serve up anything anytime. Try this leap of faith: next time you have a meeting, tell everyone to shut off their phones and lose their ear buds; then ask them what’s important to the people in the room at that very moment. They might not know. But that would be a good first step in getting them to focus on where they are, what they’re doing, and what’s important today.