Learn from your mistakes and continue to grow... 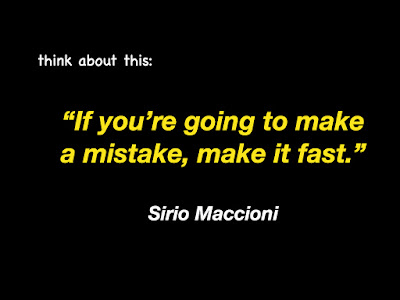 While recruiting at Cornell’s hospitality school in the 90s, I became friends with Professor Tom Kelley. On one of his trips to Las Vegas he asked if we would be interested in talking to Sirio Maccioni about opening a restaurant in Bellagio. One thing led to another and, just like that, we got into the celebrity chef business. We went on to recruit many more noted chefs and restauranteurs and the world of food in Las Vegas was never the same. The elder Maccioni and his son Mario were the first and opened Le Cirque in Bellagio, and because Sirio was so well-known, we’d all listen up when he visited and gave us his advice – he told us his motto was to learn from your mistakes and quickly move on. When you’re successful or famous, that’s not so easy because everyone tells you how right you always are; the good ones, however, are super self-critical and never stop learning and growing. As you grow your career to whatever greatness you seek, remember to continue learning, ask lots of questions, listen to everyone you talk to, stay humble, and never stop striving. In all that we did over the years, I’d have to say one of the most rewarding was associating with those celebrity chefs: we learned from each other and grew in ways we never imagined. Listen and learn today.