Get up on your tip toes, look over the horizon, and get started... 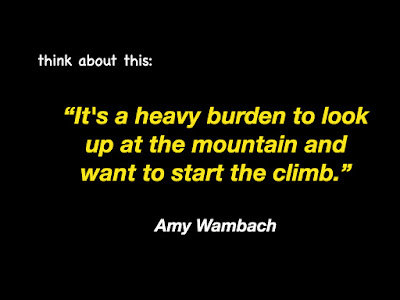 I’ve never played professional sports, so I can only imagine how hard it is to begin a new season with hopes of a championship. I suspect it’s like starting a new hotel project every 3 or4 years, knowing how hard the last one was and starting all over again. Maybe it’s like getting up and going to work every day. In each, there’s a coach or leader managing or inspiring someone or a group of individuals to put themselves fully into the effort. Knowing how hard it’s going to be. Buying into the project. All going in the same direction. Done right, it’s an effort that grows each day towards a big final ending. The payoff is the big ending, but even if that’s less than a championship-like finale, everyone needs to know they’ve achieved more than they ever thought possible. I still recall telling employees on the day before the Mirage opened that it was likely to be something they told their grandchildren about. And all these years later that’s exactly what we’re all doing. Remembering and trying to convey that feeling of completion and achievement. As hard as starting the climb might seem, the view from the top is always worth it. Get started on your climb today.