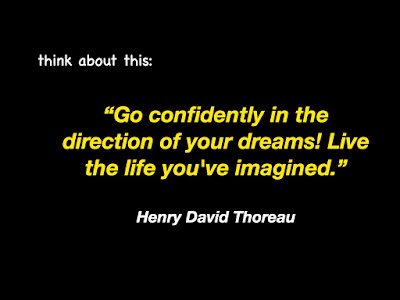 From an early age, we learned in school that Thoreau lived an idyllic life on Walden Pond, and that image inspired many of us to follow our dreams. Many years later I followed mine and bought a cabin on a little lake in the Adirondack Mountains, a place that seemed like Walden Pond to me. I’ve been coming to those mountains my whole life and, like many, know the roads there, as they say, like the back of my hands. There’s a 4-way corner near our cabin there that has always had a simple blinking yellow light; except this year they had to temporarily change that light to a 4-way stop light because of a significant detour around a bridge that was being replaced. Some highway engineers determined that changing that light would be a good safety idea... and it probably would have been if that change had been effectively communicated. Habits die hard and most of the old timers around there failed to take sufficient notice and kept proceeding through that intersection as if no change had been made to that light. To them – same intersection, same looking lights, etc. – and first week it was there, someone who’d driven through that intersection countless times before treated it like the old blinking light and died in the ensuing accident. The same highway engineers then hastily installed speed bumps and blinking signage to alert people to what they had assumed would be such an obvious change. I heard that story as we travelled there this past weekend, and immediately recalled the fact that change is hard, especially when it involves old habits. Don’t overlook that simple truth today.