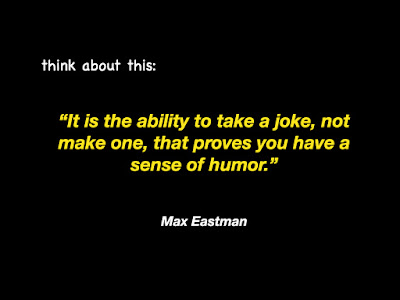 Everyone knows I’m hard of hearing: I usually explain that to everyone I meet. And that I’m a practical joker: I practice that craft often. So, years ago it was especially poignant during an April 1st Employee of the Month Luncheon at Bellagio that a group of catering managers rigged up a speaker in the potted plant behind me when I was emceeing the event. In the middle of my remarks, they started whispering things that came out of that speaker: I thought I heard something but couldn’t tell what it was, so I ignored it. After 7 or 8 of these stealthy broadcasts, I finally figured out that the noise was coming from behind me and, as I turned to see what it was, they shouted April Fool. In that instant, the shock made me jump, but rather than getting mad, I started to laugh. And everyone there at the luncheon did too. It was poetic justice: the joke was on the jokester. And right then and there I realized that it was the ability to take a joke, not just make one, that proves you have a sense of humor. We all joke around from time to time, and it’s important to know how it feels to be on the receiving end: be mindful of that the next time you have a hankering to joke around. Have some good-natured fun today.

Max Eastman (1883 – 1969): American writer on literature, philosophy and society, a poet and a prominent political activist