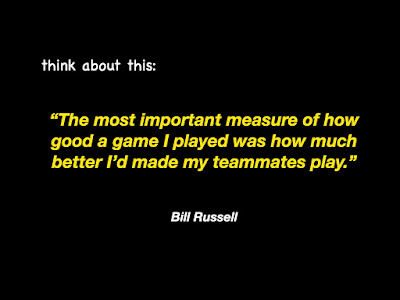 As a kid from a small town in upstate New York, my favorite sports teams and athletes were from all over, and tops among there were the Boston Celtics and Bill Russell. Listening to their games on my transistor radio at night in bed, I thrilled at how Russell, basketball’s first “big man’, dominated the NBA, not so much by how well he played, but how well he got his teammates to play. Images of those winning teams (Russell’s teams won 11 league championships in his 13 years of playing) stayed with me throughout my career: I often recalled how he, as the team captain, worked to make everyone on the team excel.  That inspired me to come up with ideas that my HR teams could then stretch to make happen. Like when I first proposed using computers to do all of our work online, there were lots of skeptics… but we kept at it, even when the experts said we couldn’t or wouldn’t succeed. Effective leaders use their vision to paint a picture of the future, create detailed plans that everyone can use to get there, communicate clearly about what tools there are and how to use them, and involve others in the drive to succeed together. It’s all about teamwork. Two heads are better than one.  Everybody wins or nobody wins. I knew I was good when people told me how good my staff was. Measure your success by how well your team does today.