Always try to do your best... 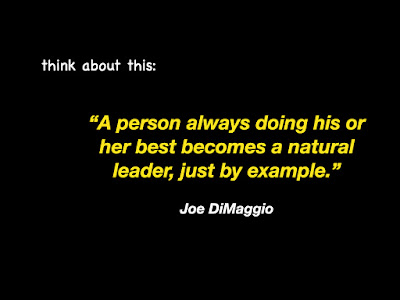 You’ve probably been told, many times, that as a manager, everything you do or say is “on the record”: your words and actions always represent the company. Lots of managers don’t walk around and talk to employees, rather they take regular routes around and miss more employees than they touch: that’s not being as good as you can be. They often avoid employees because they don’t want to be “put on the spot” and have to give answers to questions: that’s also not being as good as you can be.  Communications – genuine and accurate – are so important to a company’s employee relations culture, and those must be practiced by managers wanting to do their best every day. They don’t have to be perfect, just trying to be their best.  That’s the measure of a natural leader: like baseball players, they don’t always get a hit, but they have to give it their all every time they step up to the plate. They’re the ones that set the best examples… by always trying. Be prepared, mingle with employees and customers, spend more time listening than talking, and always say what you mean and mean what you say. If needed, practice in front of a mirror or with colleagues. Then get out there, do your best, and lead by example today.