Remember to say thanks... 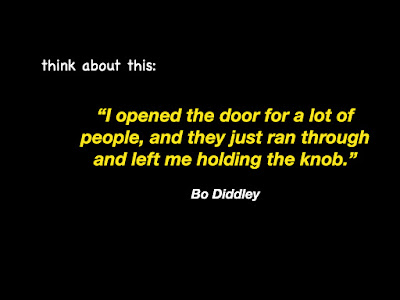 I was five or six when one of my older brothers first played a Bo Diddley record at our house… that was the beginning of rock and roll and while there were much bigger stars, they all followed in his footsteps and most passed him by. That happens a lot with people and their mentors: the mentees often go onto much bigger roles and careers than the mentors who helped them get started and not all have taken the time to acknowledge and thank them. I’d like to think I’ve thanked all the people that helped me, but I’m sure I’ve missed more than a few… but as I progressed in my career, I tried to make up for that by helping others. It’s called giving back or paying it forward, and it’s something we all should do. When you’re on the rise in your career, give credit where it’s due: that doesn’t take anything away from your success… in fact it enhances your stature. We’re all products of all the things and people that helped us along the way and should remember to let everyone know who they were and what they did. You don’t have to, and few would know if you didn’t; but it’s the right thing to do. Give credit where and when it’s due today.

Bo Diddley (1928 – 2008): American singer, guitarist, songwriter and music producer who played a key role in the transition from the blues to rock and roll.