Learn from your failures... 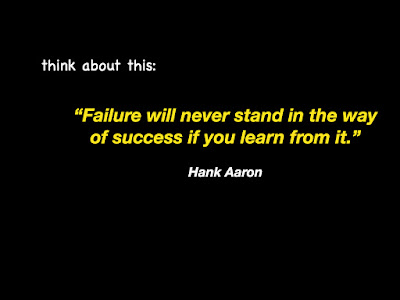 One last Hank Aaron quote: he was a baseball legend for many of us growing up in the 50s and 60s and using his quotes after his passing last month feels special. Athletes like him inspired us to learn how to “play the game” and keep on going in the face of obstacles and failures. Sports legends like him were our heroes and every kid wanted to be like the players he or she admired. So, it just seemed natural to find people we admired once we got into business and seek to be mentored by them. For me, it was guys like Charlie Meyerson, Billy Weinberger and Milton Frank, casino legends that we spent hours listening to at the old Golden Nugget on Fremont Street. Meyerson was a prolific host and taught us how to ‘play the face’ when assessing the value of a player, Weinberger was a restauranteur who became President of Caesars before joining us at the Mirage and recounting the glory days at Caesars, and Milton Frank told of making his gaming bones in Ohio and Cuba before moving to Vegas in the 60s. They all were consummate optimists in spite of the many ups and downs they faced – the moral of their stories was to learn from those failures and move on. Don’t let failure stand in the way learning to be successful today.