Don't be afraid of the truth... 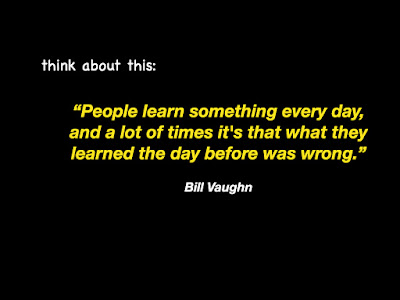 There’s nothing worse than learning you’re wrong: as bad as that is, it’s of some small comfort to know that it happens to all of us. When it happens, you shouldn’t fight it or let your pride deny it; rather you should listen and learn because there’s no shame in being wrong, only in denying or ignoring the facts. But it’s not always clear what the real facts are. That’s maybe because we’re often influenced by colleagues and environment and don’t have the time or ability to find out what’s really going on. That’s why it’s so important to surround yourself with people that will tell you the truth even when you don’t want it, one’s who won’t enable you to be confused or wrong. And don’t feel bad if you got something wrong: most of what we’re dealing with is complicated and the best antidote for that is continuous learning – in classes, online, and from mentors. You should never look at the truth in terms of winners and losers: we all lose when the truth remains hidden, and we all win when it’s found.  Understand that we’re all in this together and we all win or lose together. So, don’t be afraid to learn that what you learned before was wrong.  And don’t ever be afraid to learn something new today.