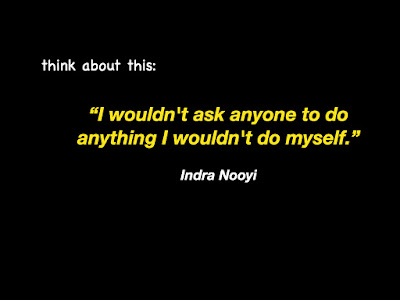 “I wouldn't ask anyone to do anything I wouldn't do myself.” Indra Nooyi

Yesterday I wrote about tolerance and the Golden Rule: today I’ve found a poignant variation of that rule. Businesses and their leaders have a unique opportunity to help heal the divisions that are festering in the US (and probably elsewhere too). As employees, we’re keen to fit into the cultural norms of the companies we work for (likewise for athletes and their teams). People generally want to get along and it’s a process that allows that to happen; it’s not blind acceptance or going along to get along, but rather it’s about being open and caring and willing, developing relationships based on shared goals and accomplishments, and learning to trust and respect each other.  These things don’t happen overnight, and often need support and nurturing by well-meaning and enlightened management. But when they do happen it just feels right. And that’s because you know your colleagues not only are treating you the way they want to be treated but also asking of you what they demand of themselves. I’ve often said we build some of the deepest and longest lasting relationships at work: much like when we’re in school or on teams together, those can be special. As my friend Johnny C. Taylor (Pres and CEO of SHRM) has said, “there is a positive role that open, honest conversations at work can play in addressing bias and political divisiveness”. Create the kind of environment where people can learn and honor the things that bring us together today.