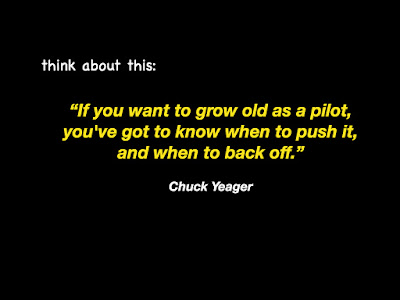 “If you want to grow old as a pilot, you've got to know when to push it, and when to back off.” Chuck Yeager

When I broke into the gaming business, Kenny Rogers was playing the showroom at the Golden Nugget in Atlantic City; it seemed apropos since his hit song at the time was The Gambler. At about that same time, the movie The Right Stuff was released: it portrayed the original US astronauts learning to fly faster, higher, and farther than any American had ever gone before. The themes from both exemplified several aspects of the American spirit that many find attractive and compelling: daring and bravado, dedication and commitment, hard work and fun, challenges and overcoming obstacles, excellence and winning. Life, like movies and song, looks for many of those qualities in its leaders and heroes, and we’re influenced by what we hear, read and see in them. The best leaders are those who rise to challenges they face, especially this past year. They understand what motivates employees and what worries them, they know how to talk and when to listen, they know how and when to manage and instruct and when to  coach and mentor, they know when to give and when to take, and they know when to push it and when to back off. Some of the best leadership training comes from watching leaders you admire: if you’ve got one in your sights, pay attention, ask them questions, listen carefully to what they say and do, and work at developing the skills you see in them. Study and learn about effective leadership today.