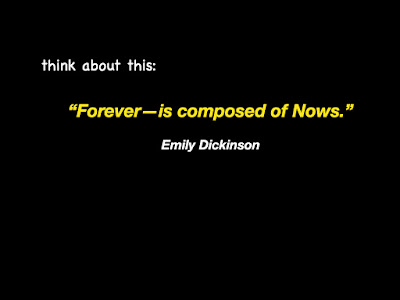 The spiritual teacher Ram Dass believed that instead of being focused on what happened yesterday or what might happen tomorrow, you should simply be here, now.  Martin Luther King, Jr. took it one step further when he spoke of the ‘fierce urgency of now’ and each person’s responsibility to deal with what’s needed, now. These concepts roughly translate into the world of work, when we encourage employees to be in the moment… to focus on the customers and projects that are right in front of us. We often get caught up in the past or in hoping for the future and overlook the challenges and opportunities of the present. But Dickinson suggests that although we have memories of the past and imaginings about the future, we only ever experience now. So, consider applying that concept to this pandemic: don’t wish for things as they used to be or as they will be when it’s all over; rather, make the best of the unprecedented time we have right now. Like: now might be a good time for reading a book, going for a walk, writing a letter, calling to a friend, talking to your employees, coaching someone, mentoring someone, learning something new, or any number of other things that, when this is all over, you might look back on and think that was something productive to have done. Don’t waste time on anything that isn’t right here and now… in fact, make the most of all of your Nows. Try doing that today.

Emily Elizabeth Dickinson (1830 – 1886): American poet. Little known during her life, she has since been regarded as one of the most important figures in American poetry.